Variations on a cat 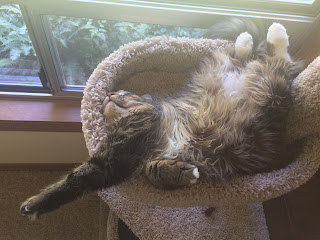 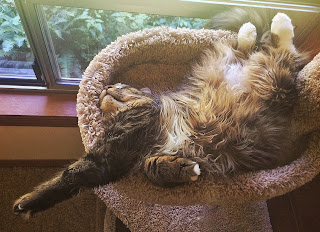 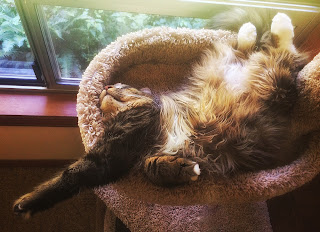 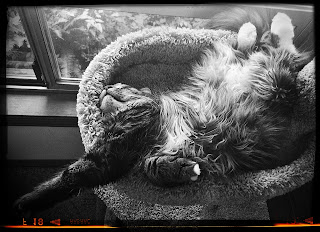 I got this shot from TCGirl, her daughter had shot it with cameraphone. I quite like it, love the super-relaxedness of the cat, but maybe there was finger prints on the lens, cuz it's hazy. So I decided to do what I could do with it. I used Snapseed app on iPad (due to my M.E. which keeps me in bed much of the time, an iPad on a floor stand is a blessing for me; I've actually realized that it has become my main computer de facto.).

So I increased contrast and sharpness, etc, and you see the result in picture number Two, no longer washed out.

Then I decided to try the "Glamour Glow" filter which I'd used sometimes to help poor skin on models on Domai. (Typical: I paid like $130 for the suite to get the filter on the Mac, on the iPad it's included in a three-dollar editor.)
Result: it reaches out much more, it's more three-dimensional, it's "glowing", vibrant...   Compared to it, the middle version looks weird, flat.


But is it a bit too "pop"? (Clicking to see them full size helps.)

Looks to me like an ideal candidate to try out Adobe's new "dehaze" feature.

Yes, that is a very impressive demo indeed.

I hope Adobe get their act together and trashes this taxation-like pricing scheme which they are practicing now. Maybe the really heavy users are okay with it, but for amateurs it is just insane.

I'm with you on the Adobe thing. For anyone interested in upgrading Lightroom, but only the standalone version, here's a guide on how to do that from a pro photographer who doesn't like the Creative Cloud: http://www.speedlighter.ca/2015/05/09/lightroom-6-2/

I'm about to upgrade Lightroom myself, but according to him Adobe makes it pretty tough to find the standalone app. His guide on how to do that starts halfway into this post.

Oh, and cat #2 is my favorite! Whenever I see a cat stretching out like that I wish I was a cat.

Yes, I too get envious of that super-relaxation. Looks great.

Thanks for the link.
It's disgustingly underhanded how big companies hide options which should be there, but which they don't want you to find.
Sometimes they are not even there. I remember when the Net was young, I decided (how naive that now seems) to write to Microsoft. I spent half an hour looking for a Contact link on their web site, but never found one. I just couldn't believe it.

It's funny how much you can change a pic, in subtle ways, photographers back in the day would have been out of luck.

Yes. I logged a lot of hours in the darkroom, and a lot of what you can now would be impossible. (For example, I think one couldn't even change the contrast of a color photo.)

Some of the things were possible, but took heaps of work. Removing an object from a photo takes seconds in Photoshop, but before it would take hours and a great amount of skill, because you had to paint it out manually with a brush and watercolor, on the physical print. And even for a small spot it's difficult to do seamlessly.